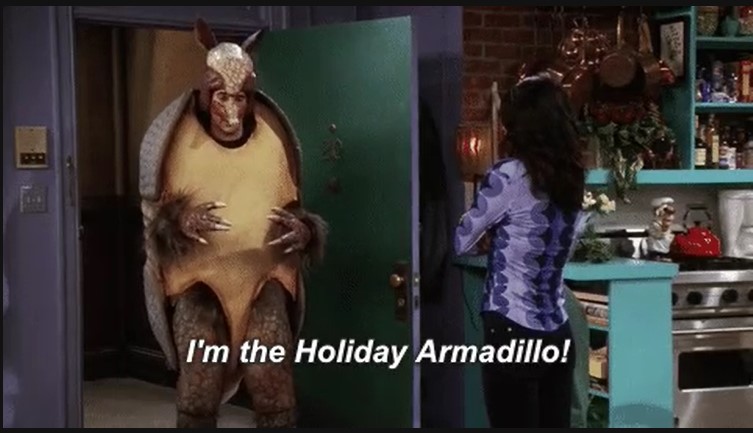 Mindy: …You’re not a thing.

Mindy: There is no holiday armadillo, that’s not a thing!

HA: Yes it is. In the year 2000, on the hit TV sitcom Friends, Ross Gellar introduced me to his son Ben as Santa’s Tex-Mex friend, to help him learn about Hanukkah and the Festival of Lights!

HA: By sheer force of Millennial belief in me sparked that day, I became a thing!

Mindy: Okay, let’s assume FOR THE MOMENT, you’re a thing. Why are you here now, why are you available this far before Hanukkah?

HA: Those Millennials are in their late 20s now, I’m losing my demographic. SELF PROMOTION!

Mindy: Hey, I haven’t been benched, it’s just…November is hard with Daylight Savings Time, recovering from Hell Week…who said I was benched?!?

HA: No one, no one, it’s fine, you’re fine! <under his breath> jeez, they were right, she is difficult.

Mindy: So, what are we doing?

HA: Not on our feet.