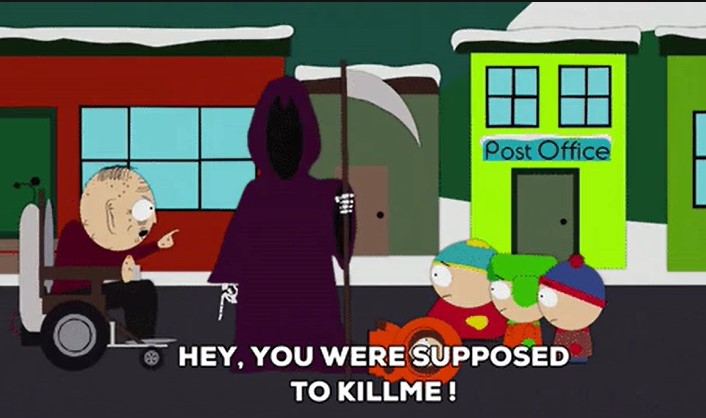 Today as I worked out I was thinking about how the OTF tag line is More Life, which is really just another glass-half-full way of saying Avoid Dying Sooner… that sentiment always seems counterproductive on the days we have Run Rows. Except for the fact that as I learn to run, I can literally run away from death faster than before, unless he just waited until the end of the Run Row and grabbed me when I am totally wiped out. But I really do think that Power Walkers are the unsung heroes here, because Power Walkers learn to walk very authoritatively under any incline circumstance, which means that if Death came for them, they could really just authoritatively walk away from him and he’d be all, “My bad, I thought I was supposed to come for you today but it must have been this raggedy-ass jogger over here instead… (me),” so I guess the lesson here is, if you see a dude in a dark hooded shroud holding a long stick thing with a sharp end, he might be here to whisk you away to the afterlife but he might also be here to help me get something off a really high shelf because all short people keep a secret stick thing to knock things off shelves when tall people aren’t around. This post didn’t really go where I thought it would go, which I think is also true of life in general and it might be the holiday sugar talking but no one else is allowed to leave the studio because two of our anchors in two weeks is enough and there are going to be new people all over the damn place and I’m so bad with new names and new humans but it’s our job to assimilate them and between that and the darn Transformation Challenge coming up I guess we need to throw the rest of these holiday cookies in the trash and gear up, or should I say, SHORELINE UP because we’re not coasting into 2020, we’re intentionally going to Shoreline the HELL out of January and February and March and maybe if we reach sufficient levels of never-previously-achieved Shorelineosity, then we can decide what’s next. I’m freaking exhausted and I haven’t even showered yet.