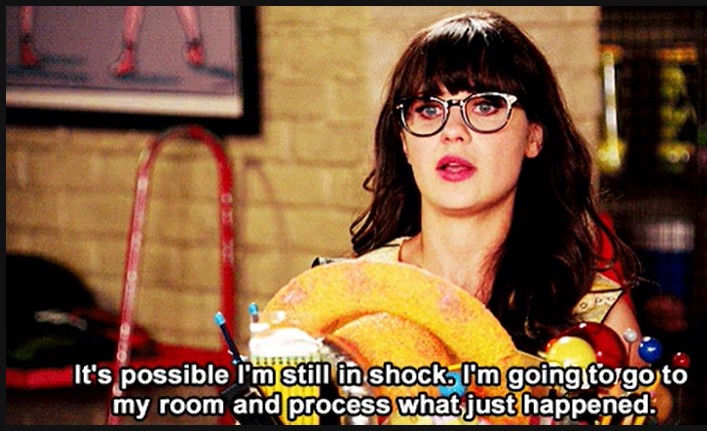 Soooo, I like to think of myself as a monogamous exerciser… one tread, just me, focusing on my own performance. Wait, that makes it sound less monogamous and more like something else that doesn’t count as monogamy because you’re completely alone… Never mind. The point is, I go to the 5k today, expecting it to be like my training, where I could focus on my own performance, be in my own thoughts and go about my business on the route. And I sort of need that, since I’m new to jogging. Mental game is everything.

But doing the 5K was a little bit like expecting to go on date with one person and accidentally showing up at a group sex party. So many PEOPLE. And some of them are in…costumes. My eyes can’t unsee the older gentleman in neon green spandex. But I don’t think that was a costume, I think that was just him.

And a little bit, you’re carried along by the excitement of it all at the beginning, but then you realize self consciously that you’re breathing too hard and about to have a heart attack, so you slow down, but then suddenly you’re in a sea of strollers and tricycles, dodging and bobbing between the rest of the slow people, but they have an excuse for being slow, because they have children with them. Which is super inappropriate at a group sex party in case you didn’t know. You hire babysitters, people.

And because you’re sort of all in this together, you can’t be quite so dismissive and antisocial as usual, because you’re wearing a NUMBER with a tracker that people can take note of and remember, so you have to measure your response instead of drop kicking that little dude on the scooter out of your path. Instead, you plaster on a social smile and try to go with the flow even though you aren’t known for your flowiness. Also faking enjoyment at a sex party really defeats the purpose of having one, in my opinion.

And SO MUCH SPIT. Way more spit than on a normal run around Green Lake. Which made me think there’s something about being one of the fast runners that make you spit more?? Every time I had to dodge another spit spot, I thought to myself, “Should I be spitting more… or, at all?” and mostly I think the answer was no, but also, being me, I knew that if I tried, I’d probably just end up with my spit on the front of my jacket for the rest of the run.

Also, much like a group sex party, when you finish, you really hope that there are people there cheering you on through the end. But if everyone finished before you, then they’re already off drinking water and eating protein bars. And you feel kind of ridiculous finishing by yourself, but of course you have to, because you’re already 99% there so might as well. Wow, this post came full circle, didn’t it?